One Last Fall Cleanup Post This Season, I Promise!

For the half dozen readers who still read my blog, I want to say "Thank You" for enduring the recent deluge of fall cleanup "before and after" posts. So without further delay, today I'll cover one more!

I've mentioned this in the past and will continue to state that a "fall cleanup" more often than not isn't necessary from a purely horticultural perspective.

(Now before you slam me for being hypocritical for taking on such work in autumn, please kindly remember that I operate a business and fall cleanups make up about a third of my income. There's nothing unethical or illegal about cutting down old perennial stalks and flowers, removing leaves from beds and pruning shrubs for dead, diseased or interfering branches; instead, there are "pros" and "cons" you may consider for doing such work now or next spring as a homeowner with a garden.

Which is a roundabout way of saying that it's your garden and you can do or not do whatever you want.)


Cynthia, a new client, hired me to tidy up the front and back gardens before winter slams into Toronto. The front raised bed has an assortment of typical perennials like irises, daylilies and hostas with some broadleaved evergreens thrown in for winter interest like Euonymus and Holly. From a purely non-scientific survey in my head, it seems 90% of the gardens I've seen across this fair city have one or a combination of these five landscape plants. If you add "Annabelle" Smooth Hydrangea (or any hydrangea), spireae, and "Emerald" cedar into the mix, that figure will go to 99%.

I've always been a bit of a contrarian and question why these plants are so popular. Oh, I know some of the likely reasons: they're relatively inexpensive (because they're easy and quick to propagate), hardy to our zone, and can be readily found wherever you (or your contractor) pick up your lumber or plumbing.

Anyway, I'm digressing again so back to the cleanup:


In the narrow backyard bed, there was a herbaceous peony and many more daylilies to cut down. You can also see the neighbour's Virginia Creeper not respecting the property line below.

The white rocks scattered in the bed as shown above may be a mystery to you. It's the client's idea to have a pea gravel path winding through the bed. Obviously, we need more gravel!

I think we can do so much better than having three "Emerald Gaiety" wintercreeper (Euonymus fortunei 'Emerald Gaiety') at the front. Overused and prone to pests and diseases like scale, Anthracnose, and crown gall so I wouldn't mind seeing these shovel pruned in the future.


My work season officially ended yesterday (in other words, I haven't received any new calls) and I'm looking forward to my annual 4 month hiatus or, as my wife describes it, hibernation. Actually, that latter description is accurate since, by next April, I'll have gained weight and be a little grouchy about not working outside! It's been another wonderful work season. I've met some wonderful new clients (and some not so wonderful ones) and continue to work with my old customers. While there were some terribly hot, humid, wet and frigid days which made working outside dangerous or tough, I've never complained. The alternative of working in an office full time is too horrible a scenario to fathom!

Another Toronto Fall Garden Cleanup in the Coxwell-Danforth Area

Putting A Garden To Rest (With This Gardener To Follow!)

Just another week or so left in my work season and a few more fall cleanups to complete for my clients. It will be too cold for me to work outside by the beginning of December and who knows, it may even snow!

My previous post titled "A Cabbagetown Toronto Fall Garden Cleanup: Saying "Goodbye" to "Annabelle" for the Season" covered the "pros" and "cons" of pruning Smooth Hydrangea (Hydrangea arborescens 'Annabelle') hard in the fall versus doing so the following spring. I was faced with the same scenario with another fall garden cleanup in Toronto's east end neighbourhood called "Coxwell-Danforth."

There are three groups of Smooth Hydrangea in this garden and, previously this summer, I staked and "corseted" the leaning stems and flowers with twine. In the picture below, you may notice how upright the brown stems and "pom-poms" are but that's only because of the twine encircling everything. 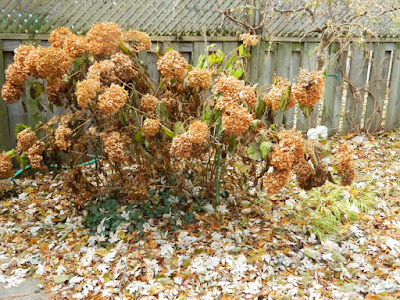 The client's backyard is small, which is typical for this area, and surrounded by two massive Silver Maple (Acer saccharinum) trees which means the garden is in shade for most of the summer and by the time autumn rolls around, a ton (not literally) of leaves collect in the yard. 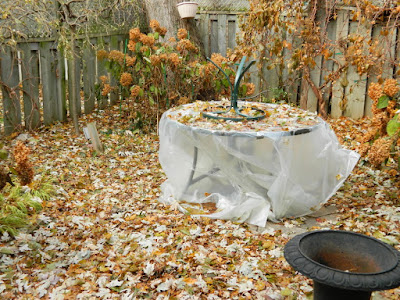 As instructed by my clients, the tasks for the backyard were to prune the hydrangeas "hard" to about 6" above the ground and collect all the leaves from the beds and patio. They didn't find snow-covered shrubs particularly interesting so down went the stems. (In case you're wondering, all garden clippings and leaves can be collected by the city to be composted.)

And here are the results from this straight-forward cleanup:

Saying "Goodbye" to "Annabelle" for the Season

I think it's safe to say that most Toronto gardeners recognize Smooth Hydrangea (Hydrangea arborescens "Annabelle") since this shrub is so commonly used in our local gardens. Why? Likely because it's relatively cheap to buy, easy to maintain and, I guess, many homeowners have a thing for white pom poms.

By late autumn, however, as the picture below shows, "Annabelle" often looks tired and wants to nod off for her winter slumber.


If applicable during a fall cleanup, I always ask the homeowner (my client) whether she or he wants me to cut down "Annabelle"s floppy stems or leave the shrub alone in the hope that snow falling and collecting on the spent flower heads produces "winter interest" for the viewer. Now if the stems were sturdy and the old blooms were upright, I would say "let's not touch them until next spring" but in most cases, the shrub hasn't been pruned for several seasons, many central stems are dead and existing stems tend to be "leggy" and prone to bend.

In other words, the client instructed me to cut them down to about 6 inches off the ground with the result below:

Instead of seeing a bent mound of dead and dormant stems and blooms, my client will see such stubs until snow covers them. This isn't a good or bad thing in my opinion. Many clients believe that this will save work next April or May (it will) and since I'm here raking up leaves and cutting down the other perennials, "I might as well look after the hydrangeas" in their minds.

I could argue with my client about the advantages of not pruning "Annabelle" hydrangeas in the fall but it's not good business sense to argue with a client when the plant's health isn't compromised by pruning hard now. (It's not smart to argue with your client for whatever reason because even if you "win", you lose.)

Smooth hydrangeas bloom on new stems anyway so cutting stems hard now or 5 months later isn't an issue with me. It's not like I'm "meatballing" a Japanese maple or anything egregious like that.

Here's the view looking towards the back fence before and after the cleanup. Besides pruning the hydrangeas, I cut back the old mushy hosta foliage and flower stalks and tattered lily of the valley leaves while not touching the lavender (foreground right) and the sole Fothergilla shrub (background left).


Here are the views looking from the back fence towards the house. It was a very gusty day so leaves fell as soon as I raked them up. Notice the smooth hydrangea stubs. Which look do you prefer: stubs or no stubs?

I also tidied up the front yard and the pictures above and below show the view from the front door down the path leading to the sidewalk.The gardens are mulched so I didn't go crazy with the leaf blower. As long as the path was cleared of slippery wet leaves (a lawsuit waiting to happen otherwise), a few leaves in the beds were acceptable.

As I have often been doing during 2017's fall cleanups, I had cut down old peony and phlox stalks. The mophead hydrangea (Hydrangea macrophylla) is not pruned since next year flower buds are on the stalks now.

And lastly, here are the views of the front path leading to the front door. The spirea just behind the gate needs to be pruned next spring as it's getting too wide and encroaching on to the path. Why this shrub was planted in a 12" wide bed is another story....

A Toronto Fall Garden Cleanup in the Greektown-Danforth neighbourhood


Half decent days for working outside are fewer as we enter in late November here in Toronto. While it was just above freezing yesterday, working conditions were dry at least. This makes a fall cleanup so much easier and almost enjoyable!

I visit Brian, my client, about three times a year and tidy up the back and front yards. The property located in the Greektown-Danforth area isn't large but being surrounded by trees, the area receives more than its fair share of leaves.


I've planted many dozens of tulips, hyacinths, daffodils and crocus in the front bed shown above over the years so we should get another nice show next early spring.

A few more fall cleanups to show so bear with me, dear reader!

Hostas are perennials found in many Toronto gardens (to the point of being overused) so more often than not, I deal with removing their collapsed foliage during a fall cleanup. The picture below shows the typical "fall hosta flop" as these perennials are entering into dormancy. You could leave the foliage alone over the winter as the plants will send up new shoots faithfully next spring but most of my clients want to remove this type of mushy mess now.

This burning bush above still has decent fall foliage. I'll remove the faded flowers from the Hydrangea paniculata "Grandiflora" standard since the client doesn't see this shrub from the house. If it was my shrub, I'd leave it alone until next spring as the flowers do collect the snow, providing some "winter interest".

The shrub on the right side of the picture above is a ubiquitous Rose of Sharon. I'm not in love with this plant but the client wanted to keep it during this garden's makeover which I profiled in this post titled "Establishing Proportion in a Toronto Shade Garden ("Yes, these junipers will get big!") I find the Rose of Sharon just self-seeds everywhere so as a preventive measure, I cut off as many seedheads right now but it's guaranteed that I'll also pull out a dozen seedlings by next summer.


The side bed has faded Astilbe, Brunnera and Chelone (turtlehead) stalks and stems, which I'll cut down. At the front of the border, the row of sweet woodruff is filling in nicely, except for one spot to the right where it died. I'll need to replace it next spring!

And here are the corresponding pictures afterwards:


A perennial that hasn't collapsed (and won't) is a very useful sedge (Carex) shown below called "Ice Dance". Toronto had two nights of very atypical and extremely cold temperatures in the minus 10-15 Celsius range last week but these sedges didn't care.

They are not touched at all right now as they will keep their form all winter. By next spring, yes, they'll look a little beat up with many of the leaves turned brown. I just grab the old leaves "by their hair" if you can imagine and clip down to 6 inches or so. New and fresh-looking shoots will emerge by May.