In Preparation for a New Toronto Ecological Garden

Installation of pollinator-friendly gardens seems to be increasing in popularity these days and I think it's a good thing. If this means planting fewer mophead hydrangeas, boxwoods, euonymus, ad nauseum, I'm all for it. From a maintenance experience, I much prefer pottering around a garden that's alive with wildlife above and below ground.

So it was with great interest that I met a new client, Amy, who wished to plant new native perennials and shrubs in her front and back gardens. But first, she hired me for the notorious "spring cleanup" which mostly consisted of removing last autumn's leaves and pruning away dead stalks.


The small front bed is dominated, literally, by a huge Norway Maple (Acer platanoides)  Anyone unfortunate who tries to garden under such a tree knows the "challenges" of having anything thrive in very dry and heavy shade.

Raking away the leaves reveals how bare the area is. A thick groundcover which can tolerate the maple's shallow roots and heavy shade would be useful to reduce weeds from getting established, reduce the erosion (the bed is sloping towards the street) and improve the overall appearance.

Or do what Amy's neighbour did: dump a truckload of black-dyed mulch and call it day. Nah, we can do better!

The picture above wonderfully shows how shallow the Norway Maple's surface roots really are.


Although you see shadows in the above picture, by June when the leaves fill the canopy, this area will be in heavy shade.


The lot is quite narrow but very long for a city property. The area along the right fence receives full sun for most of the day as it faces south. That huge tree that growing apparently right on the property line is a Silver Maple (Acer saccharinum). Fortunately, its canopy is so high up that we get partial shade or better for most of the day.

I know, the brick edgers kind of end abruptly. Maybe the client can pick up a few more to complete the curve.

I suggested placing three red-osier dogwoods (Cornus sericea) and three serviceberries (Amelanchier canadensis) in this bulge of a space. It's a pinch point so the large native shrubs could act as a screen, "concealing and revealing" the back half of the garden. Of course, something has to be done with the wonky garage as it's hardly a reward for travelling back. Actually, it's a focal point, but for all the wrong reasons!


This shadier bed above will be filled with Ostrich Ferns (Matteuccia struthiopteris) and run of the mill variegated hostas "recycled" from other parts of the property. I suggested we add lots of shade-tolerant sedges  (Carex spp.) to give us foliage contrast in terms of leaf texture. The colour scheme will be simply white and green in keeping things relaxed and a little boring. But boring is a good thing in this situation!


A rain garden could be created where the downspouts empties. Cardinal flowers (Lobelia cardinalis), anybody?


A lot of possibilities along the south facing area above but I must thin out the rambunctious Siberian squill (Scilla siberica) and tawny daylilies (Hemerocallis fulva) before they spread everywhere.

I suggested to Amy that we should remove the lumber should be removed and plant groups of coneflower (Echinacea purpurea), butterfly weed (Asclepias tuberosa) and little bluestem (Schizachyrium scoparium) and start her ecological garden this year!

And not one boxwood will be planted here, thank goodness!


I feel that forsythia, planted way too close to the deck and fence, needs to be shovel pruned! 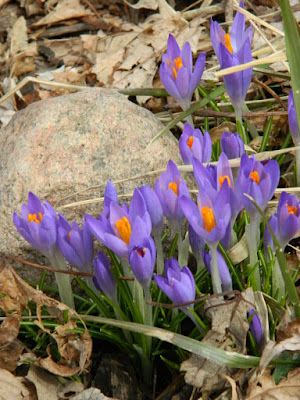 It was a cold day in the garden during the cleanup but at least some clumps of crocuses, like the one above, were happy to see me.