From Messy and Overgrown To....

Heading into October, I usually don't get requests to transplant new perennials and shrubs. Many homeowners are entering "fall cleanup" mode and garden centres and nurseries understandably don't offer a large selection of plants anyway. But recently I was introduced to a new client (I'll call her Joanne) through another Toronto gardening blogger (Helen Battersby, no need to give her an alias!). Joanne wasn't happy with the state of her backyard in central Toronto's Dufferin Grove neighbourhood so she asked for my advice in "renovating" the garden beds.
Here are some "before" pictures showing the small garden areas flanking the path to and from the back deck to the garage: 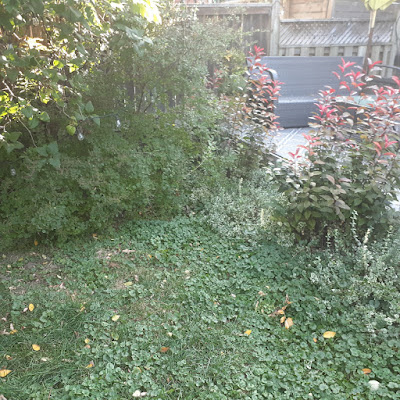 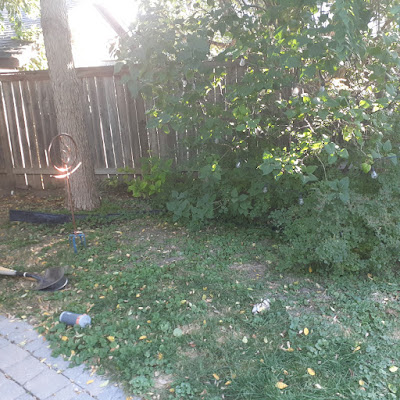 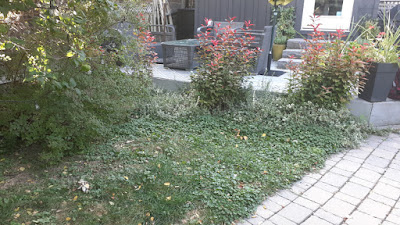 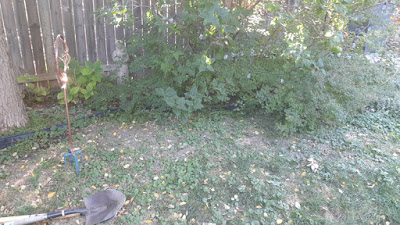 And on the other side of the yard: 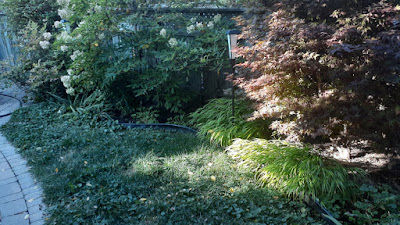 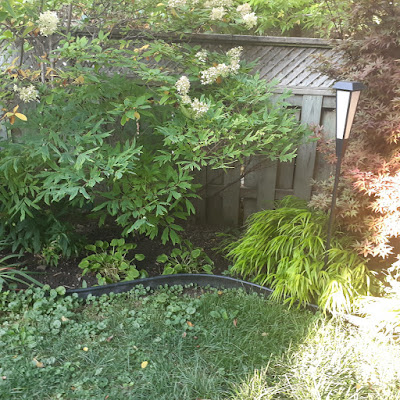 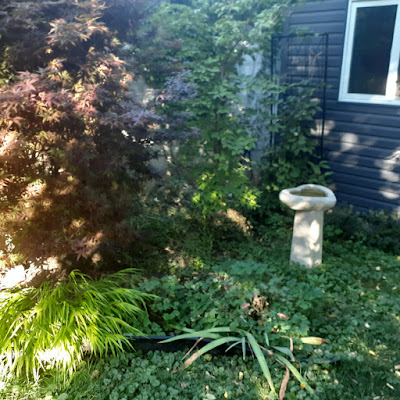 Toronto Dufferin Grove New Garden Makeover Before
I usually encounter the following in many of the garden makeovers I do:
The above pictures should hopefully show that most of these points were in play.

I suppose after many years of thinking and implementing small-scaled garden design, I intuitively think about the functions of the various garden spaces in relation to the site realities, namely, the amount of direct sunlight the garden gets, the presence of large trees, shrubs, hedges, the type and condition of the soil, etc.. In Joanne's case, I considered the low back deck and mature Kentucky Coffee tree as the dominant factors. The tree's shadow does allow for direct sunlight for a few hours around late morning into mid afternoon. The low deck that has no railing means that it was important to have low growing perennials around the seating (and main garden viewing) area. I had the opportunity to introduce shorter plants that flowered for most of summer into fall around the deck.
There are often "prized locations" in many gardens due to favourable sight lines, micro climates, or simply areas which receive more direct sunlight than others. The small area in front of (or immediately below if you prefer) the deck was prime real estate that was wasted due to presence of four old purple leaf sandcherry shrubs previously cut down to the stumps. Of course, such hard pruning doesn't usually kill them so new shoots soon emerged. There were also four small "Emerald Gaiety" Euonymus shrubs growing unchecked. The appearance was very messy looking to be honest. A neighbouring dwarf Korean lilac which hadn't been pruned in years added to the chaos. So with Joanne's blessing, I dug out all the sandcherries and Euonymus and pruned the lilac hard.
Here are some "after" pictures, showing this prominent section of the garden with new perennials. I also planted hundreds of species tulips, alliums and other bulbs to give early spring colour. The new perennials won't add colour until summer so we needed some interest in April and May. 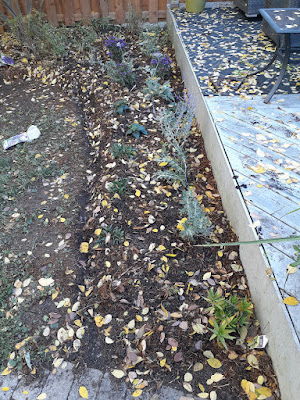 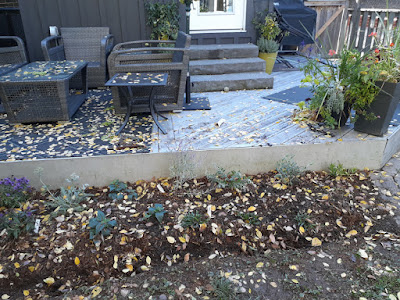 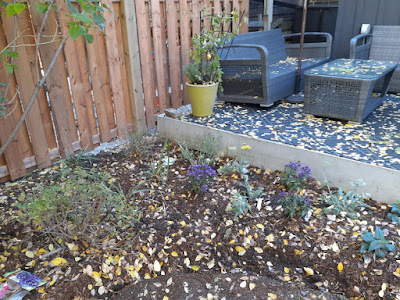 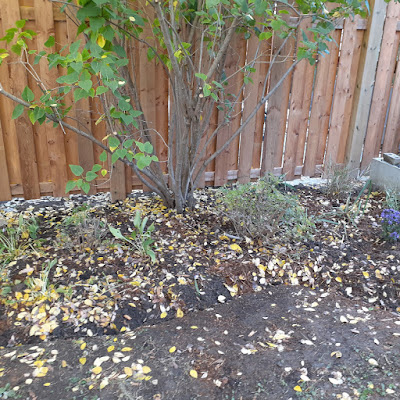 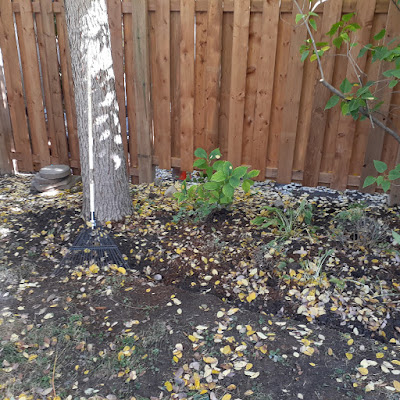 Dufferin Grove Toronto Garden Renovation After
The bed on the opposite side has mature shrubs like a P.G. hydrangea standard, an "Emperor One" Japanese maple, a Korean dogwood and two large tree peonies. They all need some pruning in order to re-establish the correct scale which should exist in this garden. The hydrangea standard currently doesn't look like a standard, the maple looks like a multi-stem shrub, the tree peonies have many dead stems and the dogwood should not have planted in the tight corner as it will get tall and wide, even for a medium sized tree. But I'll do the corrective pruning next spring. For now, I weeded all the beds, removed the unattractive black plastic edging that was popping up in many places, dug a new "trench" using an edger around the beds, planted more daffodils, tulips and crocuses and placed back the mulch. 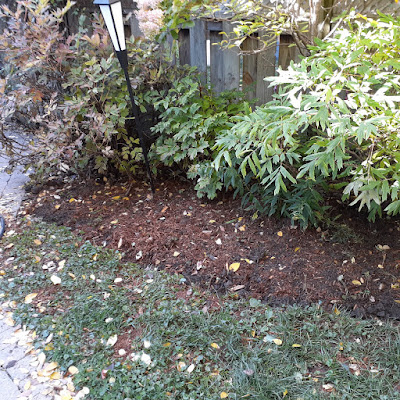 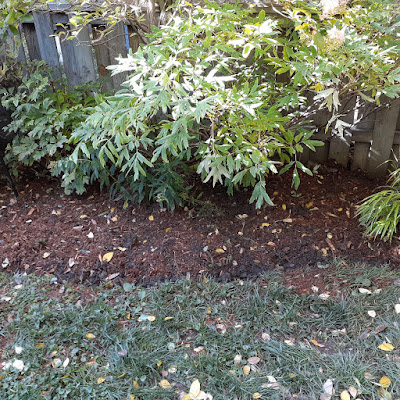 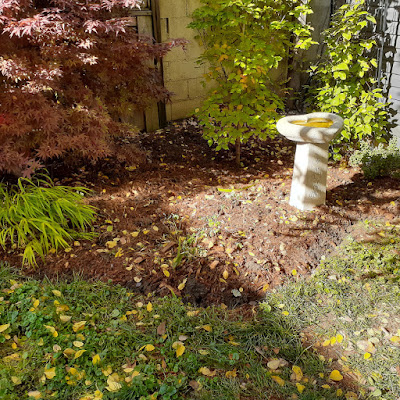 Toronto Dufferin Grove New Garden Makeover After
This small project took about 10 hours from my initial meeting with Joanne to what you see above. I may do 3-5 similar micro garden (re)designs a season which keep the creative juices going in tandem with the more mundane weeding and deadheading.
Speaking of mundane, the fall cleanups will keep me busy right until the end of November!
at October 18, 2020 No comments:

A Beaconsfield Village Front Garden Reveals Itself (With My Help)

Garden Rescue Hero (trademark, just kidding) comes to save the day! Luckily for me, the size of this central Toronto garden in the Beaconsfield Village neighbourhood is very small. Let's just say, my heavy duty loppers came in very handy with this cleanup.

All the various shrubs were unpruned for several seasons and gave the homeowners, neighbours and pedestrians that unintended wild Amazonian look.

The picture below wonderfully shows a type of grape vine (wild or cultivated) that is using the large burning bush as some sort of arbour. The grape was also growing up into the small-sized maple which is the dominant tree in this tiny space.

A closeup below of the "forest floor" showing a mixture of annual weeds and Siberian Elm saplings.

A type of wild rose (perhaps a shrub rose) which obviously hasn't been pruned for several seasons and menacing the neighbours enjoying their bench. But this is Toronto, no one ever sits this close to the sidewalk!

Order and scale have been restored!

Besides weeding, I pruned the two rear burning bushes by about two or three feet down so that they didn't look so monstrous. I also cut off one or two small side branches of the maple (you can see its trunk in the middle of the picture above) which were blocking access to the front door and the along the sidewalk).

I cut back the grape vine and wild rose to about three feet. The entire garden gave a big sigh of relief after this cleanup. I know the clients did!

Now we have space to grow nice things or, at least, to have a layer of cedar mulch or wood chips laid down to reduce weeding tasks.

I knew there was a garden in there somewhere!
at August 27, 2020 No comments:

A Backyard Cleanup in East York: the Unglamorous Side of Gardening


I come across all sorts of definitions of what customers believe gardening encompasses. For the most part, it means weeding, pruning and planting. You know, the horticultural stuff you'd expect. But occasionally, I'm hired for more mundane "property maintenance" tasks which may cover garbage pickup. I don't mind. as long as things are not hazardous to retrieve. And I don't deal with pet poo!

This short post covers weeding part of a small property in East York. No roses here, unfortunately, but if I'm solving a client's problem, the lack of flowers or shrubs isn't a big deal. Her back "yard" is more driveway and patio than actual garden beds (there are two raised beds but nothing in them.)

As the "before" pictures immediately below show, a general cleanup was in order.

The client has no intentions of planting anything in the raised beds although they do receive a fair amount of direct sunlight. She prefers to spend her money in keeping the front gardens respectable but, eventually, the sight of tall weeds and garbage out of her back window was too much for her; hence, I was contacted.

My biggest challenge here was trying to no twist an ankle navigating the pile of old bricks to get to the clumps of mature Dog Strangling Vines. And there were many nails, broken pieces of tiles and other construction debris to avoid as I was weeding the patio.

As you can tell, I rarely work in pastoral estates. And that's fine. All that turf is unnerving!

A New Front Garden on a Slope

Gardening on a slope can be difficult if retaining walls and tiers are not constructed but not impossible. In this post, I'm returning back to a sloped "garden" in the Toronto neighbourhood of Koreatown.

My first visit in September 2019, profiled in a post titled "A Front Garden Cleanup in Koreatown: Labouring on Labour Day" , involved heavy duty weeding. It became apparent quickly during my second and most recent visit that no maintenance occurred between visits, as the "before" photos show:

The client requested a new garden with some sort of groundcover, with the aims of filling in the exposed slope surface (and reduce future weeding), retaining the soil that naturally wants to spill to the bottom with every heavy rainstorm, and creating some curb appeal. Simply throwing a layer of mulch on top of the slope just means a nice big mound at the bottom over time.

The slope has no retaining elements (e.g., boulders) and the client does not wish to pay for the construction of tiered beds. The area faces west so receives full sun all afternoon.

After removing the wonderful thistle and other large weeds, my plan was to create a rock garden look, without the rocks. Unfortunately, she couldn't find my suggested plants like moss phlox and rock cress but was able to purchase other "alpine" type of perennials.

Admittedly, new "baby" perennial transplants seem puny (they are) but with regular watering during the first season, they should fill in over time.

The new garden is prone to heavy weed infestation with all the freshly exposed soil so I advised the client to keep on top of the weeding and watering. It will be interesting to see if these maintenance tasks were actually done!

There's a Patio and Garden Somewhere Under All these Leaves!

We all lead busy lives and for many homeowners (lucky for me), cleaning up the various garden areas isn't a priority. I just think of it as job security!

This post goes over a recent spring cleanup in Toronto's Riverdale neighbourhood. Or, rather, a delayed fall 2019 tidy up since the bulk of the work involved raking up last autumn's leaves.

Here are some pictures from the backyard: As you can see, nothing intricate, most of the job involved scraping up the wet and matted maple leaves which were becoming nice leaf compost.

This back raised garden area was full of weed tree saplings which germinated from nearby Tree of Heaven and maple trees.


The front area shown below had a few weeds but pruning the overgrown spirea and yew shrubs near the front steps was the priority:

My cordless electric leaf blower came in very handy in cleaning up the newly exposed flagstone.


And, again, in the front afterwards. Clear access of the paths and front steps ensured.